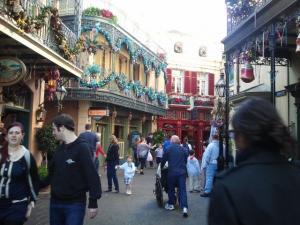 New Orleans Square is a themed land based on 19th-century New Orleans. Along with nice riverfront restaurants, it offers two of the most popular rides:

Pirates of the Caribbean

This ride was always very popular and became even more popular after the release of the movie series with the same name.

In case you didn’t know, the movie is based on the ride. But the ride benefited from the movie with new upgrades and new characters.

It is basically a boat ride through Caribbean towns with scenes of pillage and destruction – just like the movie. <FastPass Available>

If the lines are not too long, this attraction might be worth a visit. Using Disney animatronics and visual effects, you get to see various ghosts and goals in action.

I am not going to describe this ride in detail because part of the fun is the surprise, but watch out for unauthorized ghostly riders in your buggy.<FastPass Available>

It is not a ride, but it deserves its own section. This amazing fireworks display happens every night at Disneyland and you can’t miss it. Along with the spectacular fireworks show, Disney recently added visual projections throughout the park – best along Main Street.

The display changes with the seasons, with special shows for Christmas and the New Year.

You can view the display from 4 main areas inside the park as well as the admission plaza between the two parks.

The best viewing area, in my opinion, is Main Street. Try to get to Main Street before or during the Paint the Night Parade. Wait until the parade ends 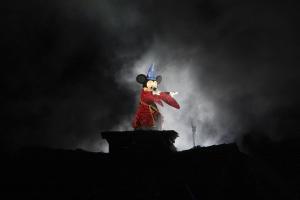 then move to the center of the street. Make sure you can see the sleeping beauty castle from your vantage point. When the show starts, you will enjoy the fireworks straight ahead and the beautiful projects on both sides of the street. An added advantage is being closer to the exit – if you plan to leave right after the fireworks.

If you prefer to be closer to the fireworks, then try to find a spot in front of the castle – may be in the center circle between the lands. You will probably have to go very early and wait a while.

Another good spot is at the “Small World” ride. It is even closer to the fireworks, but you will not be able to see the castle and Tinker Bell. 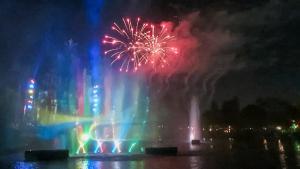 You can also view the fireworks from the Rivers of America area. Not the best location, but it is convenient if you are coming out of Pirate of the Caribbean or Haunted Mansion.

Fantasmic is a separate long-running show highlighting Disney's most favorite stories. It plays above the Rivers of America and utilizes the latest in laser, water, and pyrotechnics.

Right after Fantasmic ends, another high energy shows starts - with the gang from Disney's cartoons dancing to the beat and the fireworks in the background. This was a wonderful 40-minutes entertaining show - worth the long wait.