Tomorrow Land is a futuristic themed area full of thrills and discovery. This land offers a lot of new and original attractions.

This is one of the most popular rides in the park. It is part roller coaster and part Disney magic. Waiting in line is part of the fun. You enter a spaceport – with a huge starship in the center, receive your instructions from Admiral Ackbar, ride your rocket ship and blast off into outer space.

Your spaceship rockets through space with sharp turns and steep drops while avoiding near-collisions with asteroids and enemy spaceships. The ride is dark on purpose so you can enjoy the cosmic background.

Recently, the ride was renamed “Hyperspace Mountain” in honor of the “Star Wars” movie franchise. The ride itself was upgraded to simulate a dogfight between Rebel X-wing starfighters and Imperial TIE fighters. <FastPass Available>

This is the new and improved version of the old submarine ride. It is very popular and the lines could be very long, especially with younger kids.

It is basically a submarine ride through the famous animation movie “Finding Nemo”. Once you dive into the depths of the “Tomorrow Land Lagoon”, you will be helping Marlin and Dory to find Nemo.

Another ride based on a popular movie: “Toy Story”. On this ride, kids of all ages can become junior space rangers, ride the XP-40 space cruiser and use laser guns to help Buzz Lightyear destroy the evil villain “Emperor Zurg”.

During the ride, you have full control over your cruiser. You can spin around to locate and shoot your targets. Score a lot of points and become a "Galactic Hero". <FastPass Available>

Tip: To score a lot of points, keep firing at all times, try to find the targets with the highest points (like Emperor Zurg), and even when the ride stops, keep firing. 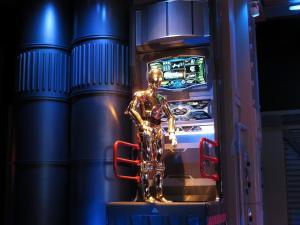 This is a flight simulator ride based on the “Star Wars” movies. Riders will start on a leisurely trip to the “Endor Moon” and end up in the middle of a space battle between the forces of the empire and the rebels.

This section of Tomorrow Land used to house the rotating showcase “Innoventions”. Now it is home to Star Wars - The Force Awakens props, characters, and memorabilia. Enjoy the spaceship models and take a peek at some behind the scene video clips.

The kids and diehard fans can line up for photos with Chewbacca or the fierce warrior Kylo Ren. At the theater, you can watch a 10-minute behind the scene film celebrating the movie franchise and offering glimpses of future releases.

In the hands-on area, you can play the latest Disney video games line “Infinity 3.0”.

Right outside the Launch Bay, you can see “Storm Troopers” terrorizing civilians.

Star Wars Path of the Jedi

Take an exciting 12-minute tour of the Star Wars saga. Starting from episode 1 and including the latest blockbuster “The Force Awakens”, relive the thrilling moments of the movie franchise with special effects and motion simulation. Your seat would move in sync with the action on the large screen.

This show is located right under Space Mountain – where Captain Eo used to play. The show is not a 3D show, but you will not miss the glasses. The action on the screen and around you in the theater makes up for the extra dimension.

You can’t have an amusement park without a car ride, and this one was around since the opening of Disneyland in 1955.

The adventure starts while you are winding through the long lines. You will pass through the Grand Stand where cars discuss the world from their point of view.

Then you will get on one of the Honda-powered cars and drive through a maze of roads. Although you do control the gas pedal and the steering wheel, the cars are on a track. So you can’t go too fast or veer off the designated road.

As you cruise down the highway, enjoy the quirky road signs and the views of other rides.

Take a ride on a rocket that spins around the solar system. This is the ride the greets visitors as they enter Tomorrow Land.

Tip: Time your lunch with the “Jedi Training Academy” show right there on the terrace. There is usually a showing every hour

French Market Restaurant: If you feel like something more substantial, then walk across to New Orleans Square and have your lunch at this great restaurant. This cafeteria-style eatery serves Cajun/Creole dishes. On weekends, you can catch some Jazz or Dixieland tunes on the onsite stage.

A fast rollercoaster/water ride that tumbles through the iconic Matterhorn mountain. Jump into your alpine sled, climb to the top of a snowcapped mountain then plunge through the caves and waterfalls. Along the way, watch out for the scary Abominable Snowman.

This ride is located in-between Tomorrowland and Fantasyland. It doesn’t belong to either land. It also has 2 different entrances. If you pick the Fantasyland entrance will get a slightly longer with some sharper turns.

The Matterhorn is a real mountain in Switzerland with a 14,700-foot summit.