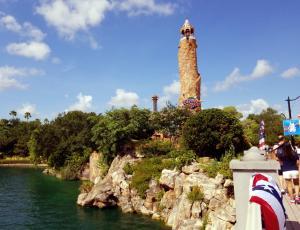 Other islands are Toon Lagoon, Skull Island, Jurassic Park, The Lost Continent, and Seuss Landing. Some of the most thrilling rides and shows on those islands are “The Incredible Hulk Coaster”, “The Amazing Adventures of Spider-Man”, “Jurassic Park River Adventure”, and “Poseidon's Fury”.

You don’t have to visit the islands in any specific order – except for their vicinity from each other – but if you have a 2-park ticket, you should make the Wizarding World your last island so you can hop on the Hogwarts Express to Universal Studios.

Enter the world of comic books and superheroes and enjoy four thrill rides. This island was

This island is designed for thrillseekers. All the rides here are extreme so be prepared to be thrown about, spun and dropped.

The Amazing Adventures of Spider-Man

The spiderman ride is a 3D motion simulation dark ride. The ride takes you to New York City on an adventure to save the Statue of Liberty. 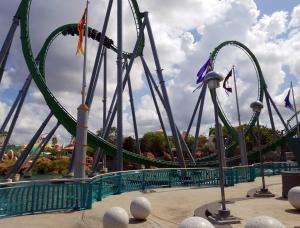 This rollercoaster is not for the faint of heart. Join the hulk in the Gama Ray accelerator to be launched at an incredible speed.

Be ready to reach 40 mph in two seconds and then speed up to a top speed of 67 mph. From then on experience freefall drops, sharp turns, and seven inversions.

Although the lines are some times too long, riders are kept busy while going through Dr. Bruce Banner’s lab and by the screens retelling the story of the Hulk.

A typical freefall drop ride with a movie theme. Doctor Doom from the Fantastic Four movie uses the audience’s fear to defeat the Fantastic Four. Not a very original plot, but for thrillseekers, the drop is enough.

Another teacup ride in which riders can control the spin of the cup. The more you spin the more you help the X-Men defeat Magneto.

You can find plenty of wet fun for all ages on this island. Riders can go on a log-ride, river rafting or shoot each other with water canons.

The log-ride takes passengers through several “caves” and a few short drops before reaching the final 75-foot drop that ends with a big splash.

Riders are guaranteed to get wet, but if they escape this fate, some evil spectators may get them with nine hoses. Believe it or not, people pay to use those hoses on the riders.

Ride a big raft through white-waters with a lot of twists, turns, and dips. This is not as exciting as the “Dudley Do-Right's Ripsaw Falls” ride, but still fun for the whole family - and you will get wet.

Me Ship, the Olive

This is a wet play area for young children built around Popey’s ship. Three levels of the boat offer lots of fun and opportunities to soak each other. From that vantage point, visitors can aim nine water hoses at riders on the Dudley Do-Right's Ripsaw Falls ride.

Skull Island is home to the newest attraction, “Skull Island: Reign of Kong”. 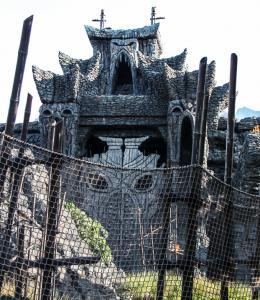 Based on the 2005 movie “King Kong”, the ride takes visitors on a dangerous adventure to skull island.

Be prepared to encounter all kinds of prehistoric animals and be chased by vicious dinosaurs and then get saved by King Kong. The moving safari vehicles and 3D effects will make you feel part of the action.

Step into Jurassic park (from the movie series), and go exploring the era of the dinosaurs. This island has three main attractions and lots of exhibits, shops, and dining options. 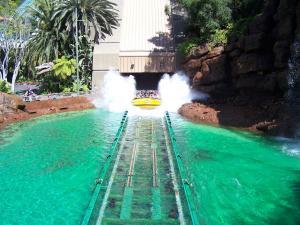 This ride is one of the most thrilling attractions I was ever on. It starts with a deceptively tranquil Jurassic habitat with life-size animatronic dinosaurs.

The raft you are riding gets attacked by parasaurolophus which diverts the raft from its intended course into the Raptor containment area. You will know that your tranquility is over when you pass by destroyed vehicles, damaged electric fences, and a Dilophosaurus eating the remains of a poncho. Then, the raft goes into a series of mishaps 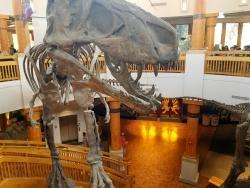 and dinosaur attacks culminating in an 85-ft plunge into the water.

If you didn’t already get wet while dinosaurs and waterfalls try to get you on the way, you are guaranteed to get wet at the end of the ride.

A slow roller coaster with suspended two-seater cars. The cars are pulled up a hill and then go on a leisurely spin around Jurrasic Park.

This children’s play area is centered around a massive Banyan tree. Kids can have fun on the slides, nets, water cannons and fountains. 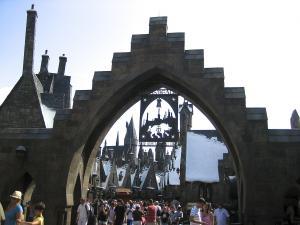 The Wizarding World is split into two areas between two parks. The two halves are connected via the Hogwarts Express, which in itself is an attraction.

At night a spectacular special effects show is projected on the castle walls celebrating the house spirit with music and laser lights. The first show of the night gets very crowded. You can avoid the crowds by going to the last 2 shows instead.

Harry Potter and the Forbidden Journey 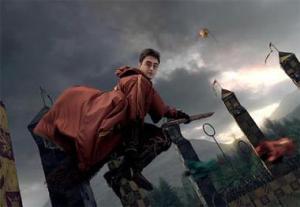 Soar over Hogwarts Castle on your magic broom with Harry and friends and try to evade dragons, giant spiders, and spirits. Join a game of Quidditch and fight Dementors before you are guided back to safety by the young wizards.

Take a fast ride on Hagrid’s motorbike through the forbidden forest and come face-to-face with the magical creatures.

The roller coaster ride travels up to 50 mph and passes by Fluffy the three-headed dog, Cornish pixies, Devil's Snare, a Centaur from the Harry Potter movies.

The motorbikes have speakers that provide sound effects and the storyline. 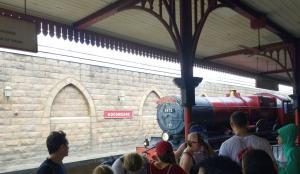 The train ride itself is an experience. The windows simulate going from the magical castle to London, and the cabin doors show reflects of the Harry Potter gang running around and preparing for some mischief.

The videos played on the windows change depending on the destination. You will see different scenery and storyline when coming from King’s Cross station. 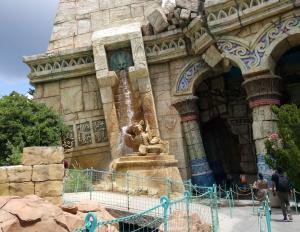 The lost continent take the visitors to ancient mythical times with a visit to old Arabia and the lost city of Atlantis. The main attractions here are Poseidon's Fury, an undersea adventure, and The Mystic Fountain that entertains and interacts with guests.

Take a trip under the sea with an archeologist, discover the hidden treasures and witness a battle between the gods.

The undersea chamber comes alive with fireballs, laser flashes, and water spouts coming at you from all directions. The chamber quakes and falls apart while you are trying to escape with the help of Poseidon.

The lost content is home to Mythos, a full-service restaurant with an ancient theme. In keeping with the lost content theme, the place feels like a cave in a lost city with a cascading waterfall.

Sitting indoors you can admire the lost continent theme, but the outdoor seating has a grand view of the inland sea (the large lake in the middle). 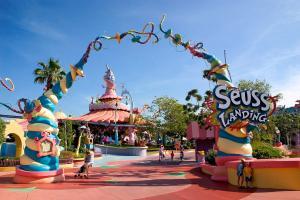 This island is themed after the famous Dr. Seuss children books. It has 3 rides, a stage show, and an interactive play zone – all geared towards younger kids.

“If I Ran the Zoo” is the play area where kids can spend their energy riding a wacky cow, sliding down tunnels, or getting each other wet.