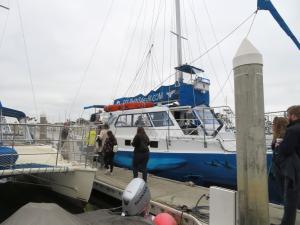 The waters of Southern California are full of Dolphins and Whales year-round, but the best time to pay them a visit is in springtime. The weather is beautiful and you have the added bonus of spotting a few whales during their migration north to Alaska.

Tip: The weather is much cooler away of the shoreline, so make sure to wear layers and bring a jacket or windbreaker.

After some safety instructions, we headed into the ocean looking for Whales and Dolphins. 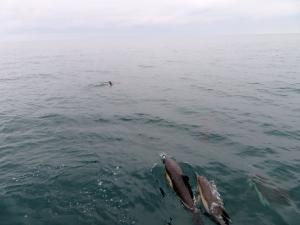 The crew knows where they usually hang out, so it was relatively easy to spot the first whale. We got a glimpse before it decided to dive away hunting for its favorite food at the bottom of the ocean. Most whales are just shy and won’t hang out around boats.

The Dolphins, on the other hand, were the exact opposite.  Once we spotted the first pod (or maybe they spotted us), we were surrounded from all directions with the playful mammals. They would swim next to the boat, dive under then jump in front of us. We also spotted a lot of baby dolphins with this pod.

Tip: No food or beverages are sold on the boat. This is due to its small size. But the check in shack has plenty of snacks you can buy and bring on the boat. You are also allowed to bring your own food and drink.

While we were enjoying the views and the marine life, our captain Marie was busy explaining 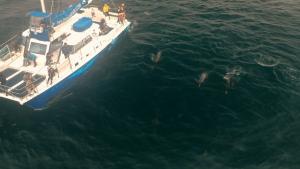 about the different species we encountered, their feeding habits, and the whale’s annual migration. Her narration was both educational and entertaining.

We learned that the waters of California are host to Fin Whales and Common Dolphins year-round. Blue Whales are only seen in the Fall and Spring due to their migration habits.

Other members of the crew were busy taking pictures and filming with a drone.

When the dolphins were swimming around the boat, I went down to the glass observation pod to watch them up close underwater. The pod is narrow and holds one person at a time. You have to lay face down to enjoy the best view. It is the closest to being in a submarine without actually diving under.

The trip took a little longer than 2 and a half hours and was filled with fun and learning. I 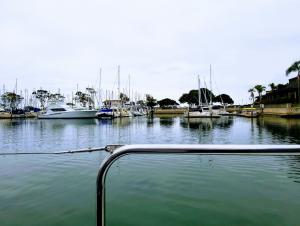 really liked the small size of the boat. It felt more like a personal safari than a commercial endeavor.

On the way back to port, we encountered another Fin Whale who stayed above water long enough for us to watch and marvel at its size and grace. This was a good finale to our adventure.

Tip: Repeat sailings on Dave’s boat are 20% off for life. So, if you enjoyed it as much as we did, come back again during a different season for a different experience.

At the end of the tour, the drone operator showed us the footage he took. One of the clips had us on deck gawking at the dolphins. We were very impressed and bought a copy.