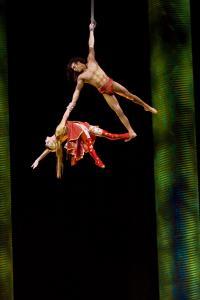 We sat in anticipation in the front row facing a deep abyss with exploding fires and eerie sounds. Cast members were standing guard prevent the curious from peeking in.

As we waited for the show to begin, we were admiring the vast theater with high platforms snaking among the seats and contemplated their purpose. We soon found out that a lot of the action is not on stage but all around the audience.

Tip: Although the front rows have their own attraction, try to sit a little further away from the stage. Much of the action happens behind and all around.

Even before the show officially started, cast members began appearing on the platform yelling at each other and seeming to fly off into thin air.

The show is a clever mix of traditional circus acts with modern technology with a storyline. The story is not clearly defined because the actors use an invented language. But that doesn't take away from the beautiful production and amazing feats performed in a fluid environment. 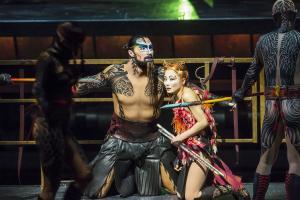 I will not spoil your fun by explaining all the acts in this awesome show, but I will share with you my favorites.

Tip: if you get to the theater early, you can enjoy some drinks from the bar and interact with the performers.

One of my favorite acts is the areal duet dance. Two performers take to the sky (on ropes) and dance around each other and float above the audience. The dance was well choreographed with many landings and takeoffs. 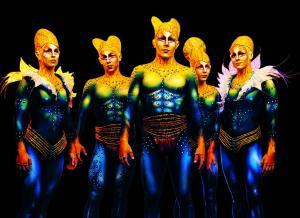 My most favorite act was the final battle between good and evil. The stage floated up into the vertical position and the performers engaged in a gravity-defying battle to the death. If it were possible to hide the ropes, you would think those actors have wings.

The jesters (or clowns) were entertaining and funny at times. I especially liked the sandy beach scene with a huge crab and turtle.

Tip: The storyline is hard to follow, so buy a program which includes a synopsis. This will help you understand what is going on.

KA by Cirque Du Soleil is probably the biggest theatrical production in the world with the latest audio/visual technology. It is located at the MGM Grand in Las Vegas. 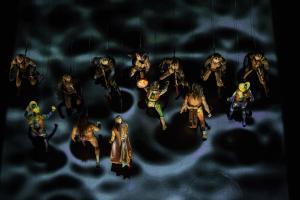 The theater has thousands of speakers along with personal stereo speakers on every seat. The video projection system utilizes infrared technology to tack performer locations and reacts to their presence.

We really enjoyed the show and planning to return to watch from a different angle soon. If you have kids older than 5 years, they will love it too.

Note:  Photography or videotaping is not permitted during the show. All media presented here is by permission from Cirque Du Soleil.

Cirque Du Soleil runs many shows in Las Vegas. One of my all time favorites is "O". Read about this Waterworld show here.