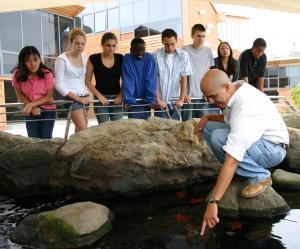 I really love dolphins and am always looking for a way to get close to them. I went on several dolphin and whale watching cruises in California, but I especially enjoyed my latest trip with the Ocean Institute of Dana Point.

The Ocean Institute is a non-profit organization specializing in marine science education programs for school kids and teachers – with outreach programs for the general public.

Interesting Fact: The top-rated cartoon show SpongeBob SquarePants was conceived by biologist Stephen Hillenburg while teaching at the institute. 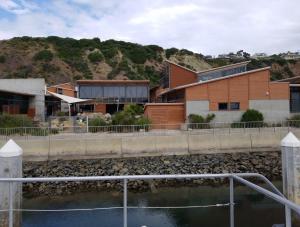 The Institute hosts several exhibits and hands-on exploration areas for kids of all ages to learn about marine life and the environment.

For me, the highlight was a trip on the R/V Sea Explorer, a 70-foot marine science research vessel, to visit the dolphins and whales in their natural habitat.

The exploration cruise was planned for 10 am, but early arrivals got to attend an educational talk about the trip by the captain Mike. Mike is also a biologist who studied Gray whales in Baja California and spent most of his life on the water. He really knows his stuff and is happy to share it.

Interesting Fact: Did you know that dolphins and Whales are off the same family? The biggest dolphin is actually the Orca (killer) whale.

As we started our cruise, we noticed a large colony of birds occupying the harbor seawall. 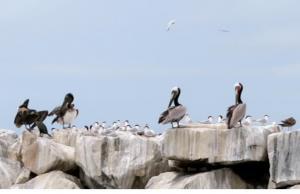 The crew handed out picture cards showing the local birds to help us identify them – and pointed out the different species and their feeding habits.

One of the unique birds we encountered was the Black Oyster Catcher who looks for its favorite food in between the rocks. Along the length of the seawall, flocks of Great Blue Heron were flying majestically heading towards the cliffs nearby.

Tip: With the temperature dropping as the boat gets into deeper waters and with the wind blowing, you may get cold. Make sure to wear layers and bring a jacket or windbreaker. 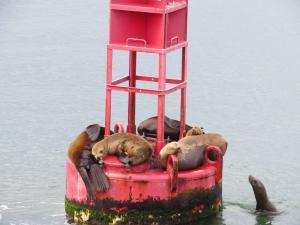 Just outside the harbor, we came across a family of Sealions sunning on a buoy. They seemed like a lazy bunch – just sitting there with no care or worries. I am sure they will jump in the water eventually to catch some fish.

Some of them had tags because they have been rescued in the past. The tags help the biologists keep a tap on their health.

Interesting Fact: If you see a tag on the right side of the tail, then you are looking at a female. A left side tag indicates a male Sealion.

After this short stop, we headed into deep sea to find whales and dolphins. Before we 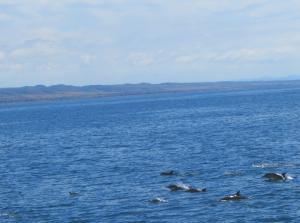 encountered any, we came across a rare find. The boat slowed down to a stop to allow us to gaze at a huge Swordfish.

This swordfish spent a lot of time floating on the surface with the fin and the tail showing about the water. The crew was as surprised as we were. This is a very rare event in Southern California.

Not long after, we encountered our first pod of playful dolphins. Those were from the Common Dolphin family – which are the most prevalent in California. Those dolphins really like to race the boat and jump around for an appreciative audience.

Interesting Fact: The common dolphin we see in California (and in most oceans) is not the popularized dolphin in movies, TV shows, and theme parks. Those famous ones are the bottlenose dolphin. 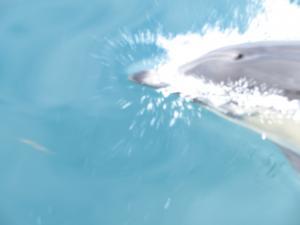 The Sea Explorer has a bowsprit above the water with a mesh bottom that enabled us to watch the dolphins as they dipped under the boat.

Unfortunately, we did not encounter and whales during this trip. We did see a spout and waited for the whale to surface, but it decided to move along.

During this trip, we encountered an example of human's impact on the environment. A mylar balloon was floating close to where dolphins were playing and feeding. The boat changed direction and slowed down to allow the crew to fish the offending object out of the water.

On the way back we encountered more dolphins and enjoyed some complimentary hot drinks. Coffee, tea and hot chocolate are available throughout the cruise on the lower deck.

We really enjoyed this cruise with the Ocean Institute. It was educational and fun at the same time. We look forward to visiting again to learn more.