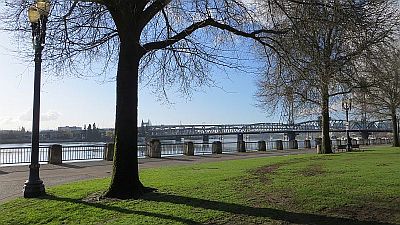 Although Oregon became a US State in 1859, the region has been inhabited for at least 15,000 years. The lush, fertile land west of the Cascade mountains has always been a magnet for natives and pioneers alike.

The native tribes lived in harmony with the land for thousands of years. For a short while, the European explorers and trappers continued this tradition.

Later, the Lewis and Clark Expedition mapped the area paving the way for a flood of settlers that changed the landscape with over logging and sprawling cities.

Oregonians love nature, and there is a lot to love all around. 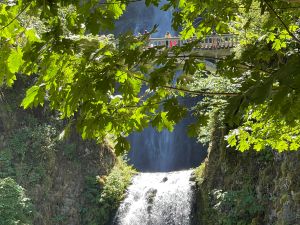 At the confluence of the Willamette and Columbia rivers, the city of Portland is surrounded by forested hills, waterfalls, lakes, and mountains.

Snow-capped Mount Hood towers 11,000 feet above the landscape and can be seen from many spots in the city. For more stunning views of the mountain, go to one of the lakes like Trillium or Frog.

A short drive away, you can find the Columbia River Gorge with its year-round waterfalls. There are 90 waterfalls on the Oregon side alone – many of them are visible from the historic highway 30 or after a short hike.

The most spectacular waterfall at the gorge is Multnohma dropping from a height of 620 ft with a trail that takes determined hikers to the top.

For more waterfalls, a visit to Silver Falls State Park located south of Portland is a must. The state park has 10 distinct waterfalls connected with several hiking trails. The rim trail connects 5 of the most popular waterfalls.

To the west, the mountains and forest meet the ocean creating stunning views and pristine beaches.

You can find many beach coves with tree stumps washed ashore and majestic rocks jutting through the waves.

One of those beaches, “Short Sand Beach” in Oswald West State Park, was featured in the Twilight movies.

If you happen to be in the Portland area, the closest beaches would be Astoria, Seaside, Cannon Beach, Lincoln Beach, and Newport. 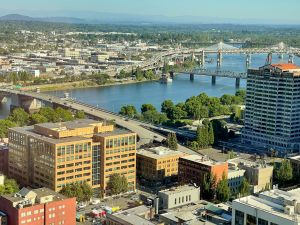 Interesting Facts: For a few years, Southeast Portland had some unusual residents. A development company brought a herd of goats to a vacant lot to help with weed control. They soon became Portland celebrities and social media darlings. They became known as the Belmont Goats - with their Twitter, Facebook, and Pinterest accounts. The Belmont Goats had to move recently to a new home when construction started on the new condominiums.

The city and surrounding areas offer many activities, adventures, and dining experiences it is impossible to see and do everything in one visit. So to help you decide where to go and what to do, you can visit the Portland pages here.

Here are some highlights: Walk around downtown, stroll along the Waterfront Park, go on a tour with a local guide, have lunch at a food truck pod, visit nearby waterfalls and mount hood, or go on a wine or beer tasting tour.

You can also visit the Japanese Gardens, Pittock Mansion, ride the aerial tramway, dine at one of the Farm-to-table restaurants.

An hour and a half drive heading west from Portland will take you to the beautiful Oregon coast – where the mountains and forests meet the ocean creating stunning views and pristine beaches.

You can find many beach coves with tree stumps washed ashore and majestic rocks jutting through the waves.

One of those beaches, “Indian Beach” in Ecola State Park, was featured in the Twilight movies.

To get to this beach, you have to hike through a forest trail passing by two creeks.

Once you reach the sand, you will be greeted by a scene from fairy tales. In the distance, you will notice Tillamook Lighthouse, better known as Terrible Tilly. It earned its nickname due to native folklore, unfortunate incidents, and the huge waves that buffet the lighthouse frequently. 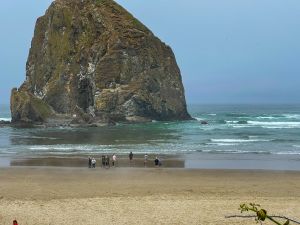 Cannon Beach is known for Hay Stack rock rising 235 ft above the waves, with many bird species making it their home.

At low tide, you can walk right up to the rock and observe colorful sea stars and other fascinating tidepool creatures. Climbing on the rock is prohibited to protect the wildlife.

The Hay Stack was also featured in many movies and TV series, including The Goonies and Kindergarten Cop.

The city also boasts 4 miles of pristine beaches and many parks.

Ready for a meal or some souvenirs? The main thoroughfare, Hemlock Street, offers many choices. My favorite place is the terrace at The Local Grill and Scope.

Seaside is a charming beach town with long beaches, a historic promenade, and many attractions for the whole family. It is a bustling city for a small town.

Visitors can walk along the half-mile promenade, bike, jog, or visit the Aquarium. Around the middle of the Prom (as locals call it), as it connects to Broadway, you will find a Turnaround with a statue of Lewis and Clark. The circle marks the spot where the explorers turned around after their long journey.

From the Turnaround, you can enjoy views of people of all ages enjoying the beach, and in the distance, you can watch the waves breaking over Tillamook Head.

The downtown area is walkable and full of restaurants and shops. Broadway Street is especially busy with many hotels and dining opportunities.