Jordan, throughout history, was a crossroad between east and west. Ancient roads through the desert connected civilizations like the Greeks, Nabataeans, Romans, and more recent states like the Umayyads and the Ottomans.

In modern days, Jordan still strives to connect western style economy and culture to more traditional Arab and Muslim values. The result is an eclectic melding of cultures that makes this desert kingdom unique in the world.

Another great attraction for visitors is the political stability in Jordan. The Kingdom is one of the few Arab states that remain peaceful and inviting. Another big attraction is the temperate weather. It is not as warm as the Gulf States and not as cold as most of Europe. 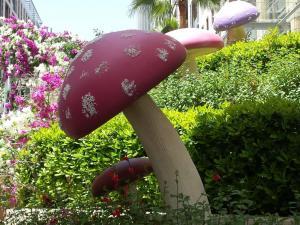 I started my recent visit by flying to Amman the capital. The new terminal at Amman International Airport is ultra-modern and spacious with lots of restaurants and duty-free shops. Passing through passports and customs is very easy and makes you feel welcome right away.

As soon as you leave the airport and enter the city you will start noticing the mix of old and new - east and west. Along the airport road, you will notice some old buildings with small shops and you will see large modern stores like Ikea or Safeway. Also along the way, you will see several universities. Jordan is known for its large population of young college-educated citizens. One could say that the workforce is one of Jordan’s exports. Many of them end up working in the Gulf States or overseas bringing much-needed cash to their families.

As you enter the city you will notice the different styles of buildings. You will see contemporary architecture competing with Roman and Greek amphitheaters and Muslim Umayyad styles - all connected with modern highways and narrow alleyways.

Amman’s curse and blessing at the same time is that it is built on top of many hills and mountains. The hills make it look very beautiful with great views. The hills also provide the fitness-minded with goods places to hike. Many neighborhoods can only be reached via a series of steps and stairs.

But because of the hills, traffic is a nightmare, and getting from place to place is always a challenge. The hills also give Amman a strange phenomenon: Weather can vary from neighborhood to neighborhood. Some places get heavy rain and others get none. Some places have snow in winter and other places rarely see any snow.

Tip: If you don’t live in Amman don’t try to rent a car. You will get lost or get very friendly with another car or bus. Take a taxi or a bus. Hire a van for long distance travel.

Talking about friendly, the people here are very nice and helpful. Most speak English and will be happy to direct you to your destination or even walk with you to show you the best route. Also, don’t hesitate to ask for recommendations to attractions or restaurants.

Jordan as a whole is full of must-see places. Some of the main attractions are The Roman Amphitheater;  Temple of Hercules; Downtown Market; Rainbow street; Petra; Wadi Rum; Jerash; Ajlun Fortress; Pela; Madaba; and Karak.

Within the city, you can go at your own pace. You should start with the Roman Amphitheater and visit the visitor center located next door. You can grab maps and useful information.

To venture outside of Amman you probably need a tour guide. One way to accomplish this is to book your tours ahead of time. Those tours are usually expensive and you have to follow a grueling schedule.

An alternative is to book your tours with a local outfitter. You will save a lot of money and you customize your tour. This is much cheaper than booking your tours from the US or Europe.

The best way to experience Amman’s culture and history is to start in Downtown Amman. You can spend hours walking the narrow streets and shopping for souvenirs. Haggling is expected so the first offered price is never the final price. While there visit one of the traditional coffee shops and enjoy a water pipe (Hooka), coffee, or tea – along with out-of-this-world desserts. Try kanafa or Baklava. If you are not ready for dessert then you must try the traditional dish called Mansaf. It is mainly rice and lamb meat with a yogurt-based dressing.

Close to the shops, you will find the Roman Amphitheater which was built in the 2nd century BC. It is one of the largest Roman theaters in the world and used to seat up to 6000 spectators.

After you pay the entrance fee go exploring and try to climb the steep stairs to the top. From the top, you will have a commanding view of downtown shops and the old town buildings covering the hills.

At the bottom of the theater to one side, you will see the museum which boasts a collection of Bedouin artwork and some roman artifacts.

Next to the museum, our guide and photographer took some pictures of my wife in traditional Bedouin attire. Wearing the traditional dress and posing for the pics was a great experience for my wife. Meanwhile, the kids and I were running up the stairs exploring every corner of the theater and admiring the views.

On top of the highest hill in Amman, you will see a citadel and a Roman temple. This hill is called Jabal Al-Qalaa. To get to this Citadel and Temple you can walk across the street from the theater and climb some steep steps to the top. If you prefer, you can take a taxi to the top.

At the top, you will see evidence of Bronze age, Roman, Byzantine, and Umayyad civilizations. The most intact and impressive of them is the Umayyad Palace which was built around AD 749. Not far from this palace you will find the Roman Temple of Hercules.

Next to the temple, you will find The National Archaeological Museum where you can view 6000-year-old skulls from Jericho, Umayyad artwork, and examples of the Dead Sea Scrolls.

Close to downtown you can visit some popular spots like:

• Rainbow Street: a charming little street with shops, cafes, and bars. Many cafes have a commanding view of the city.

Tip: Go into one of Cafes in the late afternoon and stick around until dusk. You will witness the city lights come on and listen to the calls for prayer. If you are lucky you will catch a great fireworks display.

• Darat al Funun (or “House of Arts”): it is located within 3 old villas and houses both permanent and visiting art collections.

• Gardens Street: a famous shopping area with lots of shops and restaurants.

• City Mall: If you already missed shopping at malls, then head to city mall – one of the largest malls in Amman.

• Wakalat Street: A pedestrian-only street in Sweifieh full of big western stores, restaurants, and cafes. Lots of benches along the way for resting and people watching.

• Royal Automobile Museum: If you like cars and would like a quick history of the Royal family, this is a good place to visit.

• Ahl Al Kahf: Whether it is the true location of the story about the sleepers – or not, it is an intriguing place to visit. All three main religions mention the 6 or 7 who slept for many years and woke up in the distant future.

• Reem Al Bawadi Traditional Restaurant: Although I did not visit this time, people are raving about the food and the atmosphere. I will definitely try it next time.

Finally, my visit to Jordan was short – only one week. It is not enough time to experience all the culture, history, and foods of the kingdom. I definitely intend to visit again and explore the places I missed.

Venturing away from Amman, you will come across a melange of cultures and history. In the following pages read about the Lost City of Petra, the Roman Ruins of Jerash and the Umayyad castle of Ajloun.