Circus Circus was traditionally the main family destination in Las Vegas – long before everyone else started catering to families with children.

The casino had one of the biggest arcades in town, a free continuously running circus act, and a very popular buffet restaurant. 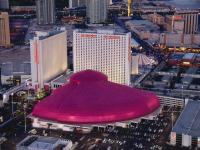 In 1993 the new indoor amusement park opened its doors as "Grand Slam Canyon" under the distinctive dome all pink glass walls. It only had 4 rides and a few dinosaur-themed animatronics that interacted with riders.

Many more rides were added since then and the dinosaurs were removed to make room for more attractions. Now the park has two roller-coasters, several thrill rides, simulator rides, a freefall ride, and laser tag.

Some of the must-do-rides are:

This is the original roller-coaster ride at the park and the world's largest indoor double-loop, double-corkscrew 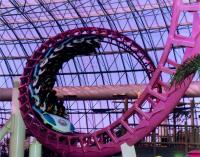 coaster. The ride speeds through the dome at 55 mph with loops and corkscrews and ends in a helix through the mountain at the center of the dome.

This new roller-coaster opened in 2014. It features a 90-foot climb and a vertical drop with a lot of twists and turns and some inversions. The speakers in the cars blast high-energy music that was composed for the ride. The ride is only about 1 minute – too short.

Several 4D experiences are running at the same time at the park. They are basically motion simulator rides with 3 different themes. You can go on an adventure with Sponge Bob, go exploring with Dora, or cool off with the penguins from Happy Feet. 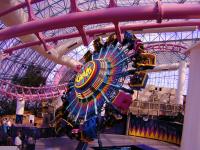 This is your basic Laser Tag game. You get your gun and vest and go hunting your fellow players. The system keeps track of your shots and you get your score at the end. The arena is smaller than the dedicated laser tag places, but it is about what you expect from an amusement park or family fun center.

If you like to be shot up high and then dropped like a potato sack then this ride is for you. The ride shoots you straight up at 4 g’s and then lets go. You will definitely feel you are freefalling, but it doesn’t last for long.

You can get single ride tickets but it is much more economical to get a day pass. You can the day pass at around $30. Single ride prices are from $5 to $10.