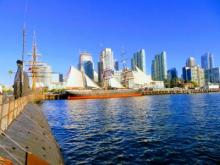 I passed by this place many times without giving it a second glance. It is in Downtown San Diego’s Embarcadero and right in front of the waterfront park.

During this last visit I decided to venture inside and I was pleasantly surprised. At first glance, it looks to be very small with few exhibits indoors, but the real value is outside with several ships and submarines on display.

The museum hosts a collection of 11 vessels with the main building being a converted ferryboat. Some of those ships are active and provide short cruises for visitors. 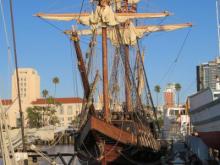 The newest addition to this collection is a replica of the San Salvador. The ship was built in full public view (2011 to 2015) at the Spanish Landing Park in San Diego. It was a great opportunity for everyone to witness how a tall ship is constructed.

This majestic ship rests at the harbor with all of its sails proudly unfurled and melding with the San Diego skyline. Before this resting place, it suffered a tumulus history. 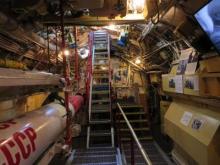 This fully-rigged iron windjammer started its life as the Euterpe with a collision and a mutiny. A year later it was caught in a gale and lost its mast.

After this rough start, the ship spent many years ferrying immigrants to New Zealand. Before settling in San Diego as a museum piece, the ship spent time carrying fishermen to Alaska as the Star of India.

The best way to enjoy San Diego attractions is by getting a Go City Card. You pay one price and get all the attractions you want. Go San Diego Card

Descending into this submarine and walking through the very narrow hatches and hallways, I was wondering how can a group of sailors live for extended periods under the sea in those cramped conditions.

This class of subs is known for their extreme-deep diving capability. This particular one set a depth record of 3000 feet in 1968 and launched the first torpedo at that depth.

This submarine has a more intriguing and colorful history. It was a Soviet-era sub that stalked 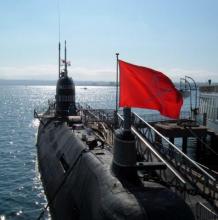 US ships and subs during the cold war and was involved in the historical events at the Bay of Pigs near Cuba.

As traverse this huge sub you will relive events that shaped the world history during the Cuban Crisis. One Russian navy officer, Vasili Arkhipov, is credited with saving the world from the brink of nuclear war.

Although the crew of this sub is considered heroes to history, there were faced with inquiries and humiliation upon their return to port.

The museum’s website is full of information about exhibits, hours and admission prices

You can also find important information at Wikipedia.