My wife and I recently ventured through the Gaslamp Quarter in downtown San Diego to sample the local delicacies and learn a few things about its history.

We did discover a few great places, but we learned that the downtown area used to be a haven for drunken sailors and houses of ill repute. Thankfully, it is now a place for the whole family to stroll around, shop, and enjoy world cuisines and delicious treats. 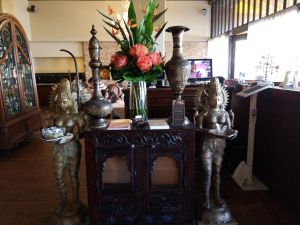 We started our journey at the Royal India restaurant around lunchtime. The first thing that grabbed my attention were the fanciful decorations and authentic statues and pottery. But I soon forgot about the ambiance as I browsed through the mouth-watering buffet choices.

I usually avoid buffets, but in this case, it was a nice way to sample different dishes. Everything I tried was very flavorful and fresh, but my favorite was the Chicken Tikka Masala and Samosa. The kheer (rice pudding) was a great way to end the meal.

We knew we still had a lot of places to visit on this tour so we tried hard not to stuff ourselves, but it was a losing battle.

After this great beginning, we started walking towards our next stop, Berkeley Pizza. Along 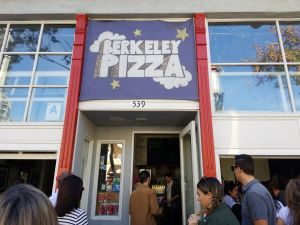 the way, we learned some interesting facts about the area. It all started when in 1867 Alonzo Horton, known as the father of downtown, purchased some land and developed “New Town” to the south of the established Old Town. The city later added 50 gas lamps to light up the streets - which gave the area its current name.

Very quickly New Town filled up with gambling halls, saloons, and brothels and became a thriving red-light district. But in 1912 the city cleared up the area in preparation for the Panama-California Exposition.

After this quick history lesson, we entered Berkeley Pizza to try their deep-dish Chicago-style pizza. The place is very small and always crowded. I thought this is a good sign, the pizza must be phenomenal. But I was disappointed. The slices had way too much tomato sauce and the pepperoni was too greasy. The crust and cheese were very good, so maybe I was just unlucky with my choice. 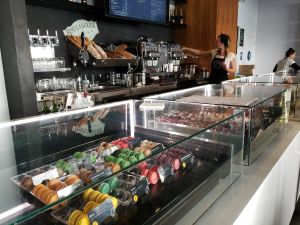 Our next stop made up for the disappointment. We headed towards Le Parfait Paris, a French bakery.

Along the way, we stopped at the Gaslamp Museum. This small museum is a nice way to learn about San Diego and its main founder Horton. The garden outside the museum overlooks several historic buildings and has a statue of Bum the dog who led many parades and ran with the fire brigade.

At Le Parfait Paris, we delighted our eyes and our palettes with the large selection of pastries and desserts. It was hard to choose our treat, but we ended up with 2 flavors of macaroons - the best macaroons ever. We liked this place so much, we went back the next day for breakfast. They actually offer much more than dessert. You can order Crepes, Quiche and Panini.

After that delectable interlude, we started walking towards El Chingon. This 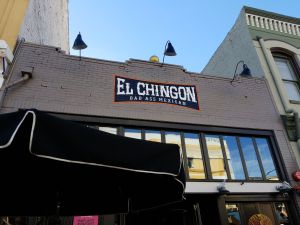 restaurant has multiple personalities. You can sit outside and enjoy your meal while gawking at people walking by or you can sit inside with the noisy sports bar as your background music. We went for the third option, a quiet second floor that overlooks the bar below.
While sitting on our secluded balcony, we were served homemade chips and salsa. They bring a tray with several flavors of house salsa in bottles.

Along with the chips and salsa, we tried their “Al Pastor”, the slow-cooked pork taco. It was very rich and tasty and full of meat. Our only disappointment was when we ordered the house margaritas. We had to wait a very long time for our orders and they weren't anything special. 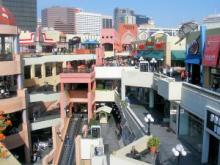 After this pork and margaritas stop, I was glad we had a long walk ahead of us. We needed to digest all this food.

Our destination was the Little Italy neighborhood, but along the way we got to visit Horton Plaza Mall, US Grant Hotel, and Spreckels Theater.

Horton Plaza is an outdoor 5-level shopping and dining mall right in downtown San Diego. Its bright colors and tricky architecture make it a unique place to visit. Stairways and pathways between the various sections and floors don't connect. So you have to browse around to find the next section.

The Plaza has some of the large anchor stores like 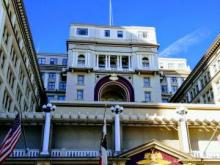 Macy’s and Forever 21 and plenty of small stores. It is not considered a major mall, but it's within walking distance from downtown hotels and the waterfront.

The hotel is infamous for its restaurant the “Grant Grill”. Women were not permitted at this place before 3 pm until a group of women in 1969 staged a sit-in. After the bad publicity, the restaurant was forced to abandon its men-only policy. 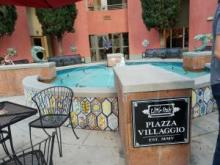 The Spreckels Theater is another historic place in downtown San Diego. It started life as a live performance theater but now can show movies. Spreckels is a well-known name in town. John Spreckels was responsible for building the Hotel Coronado and financing the San Diego-Arizona railway.

After this long detour, we arrived at Little Italy with its busy streets and festive shops and restaurants. This little neighborhood started as a fishing town with immigrants from Italy founding Tuna fishing fleets and a large canary. All canneries closed by the 1980s, but the neighborhood transformed itself into a shopping and dining destination.

We ended our food safari at Davanti Enoteca in Little Italy. This restaurant serves traditional Italian dishes with a few American standards. By the time we arrived here, we were already stuffed, so we only had a dessert. We tried their tasty focaccia with cow cheese and topped with honey – a sweet and sour delight.

We were guided through this food tour by Eric from “Bite San Diego” who was very knowledgeable and friendly. If you are interested in taking a similar food tour, ask them for their Downtown Walking Tour.

Over the years I enjoyed a great variety of cuisine in San Diego. Some of my favorites are listed below: 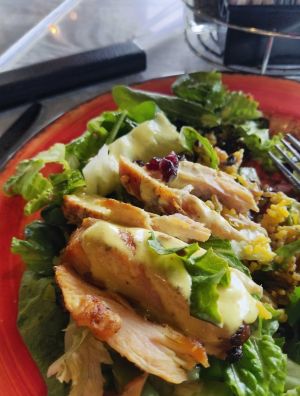 A great place for Sushi lovers with unique Rolls, Sushi, and Sashimi along with a full hot-dish menu and bar.

A small place in a strip mall next to SeaWorld that offers great Caribean dishes. Try the "Key West" - a grilled marinated chicken with curry and Rum Cranberries. You can also build your own dish by picking your meat, sides, and sauces.

Yes, it is a donut place, but their creations and huge and delicious. The menu changes daily depending on available fresh ingredients.

A small hole-in-the-wall restaurant offering fresh Poke and traditional Japanese dishes. You can build your Poke bowl yourself from the Poke Bar.